Over the past decade, General Motors ( GM 1.63% ) and Honda Motor ( HMC 0.27% ) have found numerous opportunities to work together to develop new technologies and reduce their costs. The two automakers have focused much of their cooperation on new energy vehicles and self-driving technology.

Last week, GM and Honda expanded their relationship with the goal of making electric vehicles (EVs) more affordable than ever. This partnership could potentially position GM and Honda as the highest-volume EV manufacturers in the world within a decade.

Costs were already in focus

The initial stages of cooperation between GM and Honda mainly centered on developing new technologies like fuel cells and autonomous vehicles. More recently, though, the automakers have primarily focused on leveraging the benefits of their combined scale to cut costs. (Together, they sold more than 13 million vehicles in 2019.)

In April 2020, the companies announced that they would codevelop a pair of EVs for Honda for the North American market. GM will supply its Ultium battery system and EV platform, while Honda will design the interior and exterior of the Honda Prologue (coming in the 2024 model year) and an unnamed Acura EV SUV that will follow. Both models will be built at GM plants, boosting capacity utilization.

Later in 2020, GM and Honda revealed plans for a full-blown auto alliance in North America. As the companies said at the time: “An alliance in North America between Honda and GM would leverage the best technologies and generate substantial cost efficiencies from shared vehicle platforms and propulsion systems, joint purchasing, potential manufacturing efficiencies and other collaboration efforts. … GM and Honda also plan to share R&D and engineering costs for select future co-developed vehicle and propulsion platforms.”

In short, GM and Honda are finding ways to develop unique vehicles without unnecessary duplication of effort. That will allow them to unlock cost efficiencies behind the scenes while maintaining distinct identities in the minds of consumers.

Last Tuesday, GM and Honda announced deeper cooperation in the EV market, with the explicit aim of driving down costs.

First, the automakers will develop a series of vehicles using a “new global architecture” that incorporates the next generation of GM’s Ultium battery technology. They will also collaborate on production strategies. This will allow them to produce affordable EVs at scale starting in 2027, with a particular focus on the popular compact crossover segment. The companies expect the vehicles created through this partnership to have starting prices below $30,000. 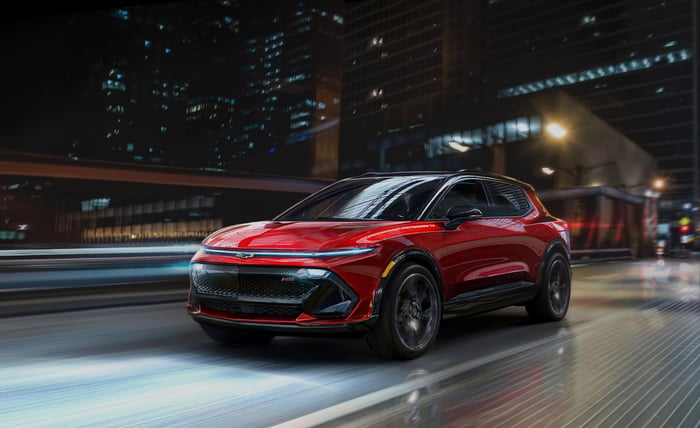 Second, GM and Honda intend to work together on future EV battery technologies, including solid-state batteries. Once again, the primary goal is to reduce costs.

Affordability is the key to mass-market success

Today, Tesla ( TSLA -3.00% ) is by far the largest EV maker in the world. However, Tesla’s long-term plan to produce increasingly affordable EVs has gone backward lately. The cheapest version of the Model 3 — its “$35,000 car” — now costs roughly $50,000, including the destination fee. Moreover, Tesla has shelved plans to produce an even cheaper car with a starting price around $25,000 for the foreseeable future.

Given supply constraints and the strong demand for high-priced EVs from early adopters, Tesla has good reasons for focusing on boosting output of its existing models and the Cybertruck. However, price will be a key consideration driving purchase decisions in the mass market. By continuing to focus on building EVs that cost $50,000 or more, Tesla is leaving an opening for rivals to win with consumers who can’t afford to spend that much on a vehicle — i.e., the bulk of the market.

General Motors and Honda are looking to capitalize on that opportunity. GM already had plans to begin selling an affordable EV version of the Chevy Equinox compact crossover in late 2023. It’s targeting a base price of $30,000. The vehicles coming in 2027 as part of GM and Honda’s expanded partnership will cost even less, and future battery cost improvements could pave the way for even cheaper EVs.

If GM and Honda use their combined scale to develop the lowest-cost EV platform, they will be able to price their EVs at levels that its rivals can’t match. That would give them the inside track to leapfrogging Tesla to become the volume leaders in the EV industry by the early 2030s.

This article represents the opinion of the writer, who may disagree with the “official” recommendation position of a Motley Fool premium advisory service. We’re motley! Questioning an investing thesis – even one of our own – helps us all think critically about investing and make decisions that help us become smarter, happier, and richer.