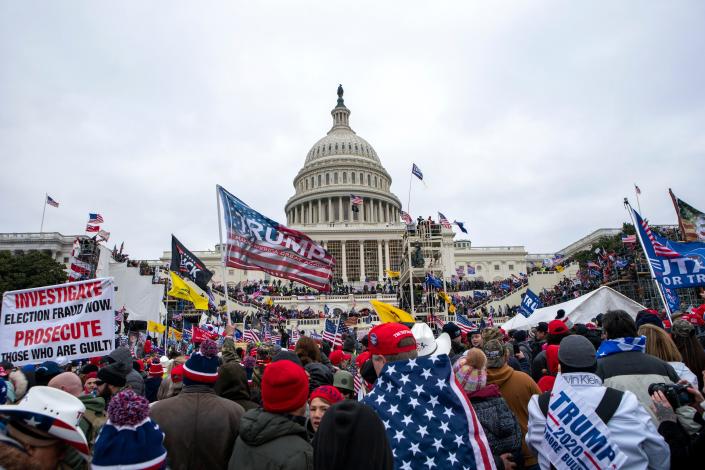 They’re all sipping their lattes and whining, “But this is important information about a deadly domestic terrorist attack on the heart of our democracy and all Americans should want to know how that tragic day unfolded and what the House select committee has uncovered after 11 months of investigation and more than 1,000 interviews.” Blah, blah, blah.

Guess what, libs? You’re going to have to wrap your little minds around the fact that REAL Americans don’t buy the false narrative propagated by Big Calendar that Jan. 6, 2021, is a date that exists.

Trump’s allies are on this year’s ballot: Here’s how Democrats can stop them.

The “True Patriot Calendar” I received when I joined the Tucker Carlson Fan Club for a $59.99 annually recurring fee shows the truth – Jan. 5 is followed by Jan. 7, meaning Jan. 6 is a myth. Nice try, socialists and probably also George Soros.

I applaud the folks at Fox News for shielding viewers like me from any information that might counter what former President Donald Trump has told me to believe in daily emails asking me to give him money.

Rather than air the sure-to-be-dull-and-fake hearing, the network’s regular nightly lineup of “Hannity” and Tucker Carlson will run as usual.

All the other major networks are showing the hearing live but it’s not like Fox News viewers won’t have access to the hearing. They can watch the Jan. 6 committee on Fox Business, on the Fox Nation streaming service and on the Fox News website. All they have to do to tune in, I imagine, is cross a rickety, narrow bridge guarded by host Laura Ingraham, who will ask them to answer three riddles in order to pass. (The answer to each riddle will be: “Benghazi.”)

Mike Pence saved American democracy once. Now, he’s helped to do it again against Trump.

It’s a completely reasonable decision since, according to a New York Times report, “Fox News averaged 1.5 million viewers at any given time during the day” last month while “Fox Business averaged 136,000.” Everyone knows 136,000 is more than 1.5 million – case closed.

Also, according to a Fox News Media statement, live video of the hearings will be “offered” to all Fox broadcast affiliates across the country, presumably in the same way one might “offer” a friend a piece of candy while holding a sign that reads, “If you take this piece of candy I will hate you forever.”

Evidence of a coup sounds boring

Look, all these hearings are going to do is provide the public with “evidence” and “sworn testimony” and “facts” that detail whether President Trump and people around him engaged in a coordinated effort to overturn a free and fair election while inciting a violent attack on the U.S. Capitol intended to interrupt the peaceful transfer of power, all while several Fox News hosts including Sean Hannity and Ingraham texted with high-level White House officials as if they were active members of the administration. In short: BORING!

What we Fox News viewers need to hear is anything that is not any of that. So here are the segments I expect we’ll see the network air during Thursday night’s Jan. 6 committee hearing.

In the 8 p.m. ET slot, “Tucker Carlson Tonight” will feature the following: “Jan. 6 didn’t happen, and if it did, it would’ve been Hunter Biden’s fault”; “Where is Hunter Biden and why is he probably lurking in the bushes outside your house waiting to rob you?”; and “Was critical race theory responsible for the Jan. 6 attack on the U.S. Capitol that didn’t happen? (Hint: Yes, absolutely.)”

That interview will be followed by a special “Hannity” report titled: “Is the Jan. 6 committee just a smokescreen to draw attention away from Hillary Clinton’s secret plot to turn American children woke by exposing them to Disney movies that promote ‘inclusion’?”

At 10 p.m. ET, Laura Ingraham will be back from her bridge-guarding duties to host “The Ingraham Angle,” which will feature a full hour of interviews with people who aren’t doctors speculating that President Joe Biden has “super-turbo-mega-dementia” and should be impeached and incarcerated.

By 11 p.m. ET, we can all turn in for the night, safe in the knowledge that Fox News has once again protected us from knowledge.

You can read diverse opinions from our Board of Contributors and other writers on the Opinion front page, on Twitter @usatodayopinion and in our daily Opinion newsletter. To respond to a column, submit a comment to [email protected]